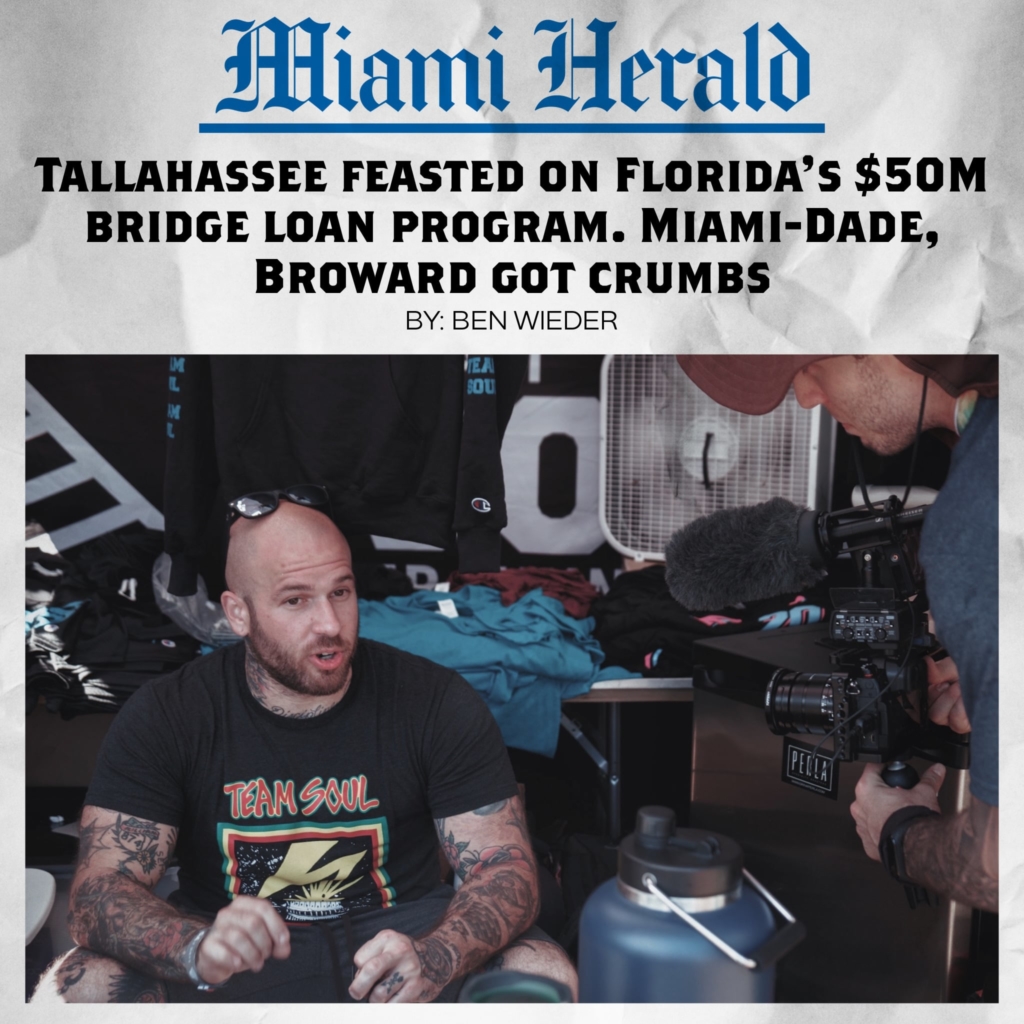 When Florida Gov. Ron DeSantis promised small businesses relief in the form of a $50 million short-term loan program, Daniel Lopez-Calleja was one of the first in line. The owner of the West Miami gym CrossFit Soul applied for one of Florida’s emergency bridge loans on the first day applications became available in March.

He checked and checked and called more than 10 times to try to find out whether his application was approved for the interest-free loan. He was never able to get anyone on the phone, and weeks later he found out via email that he had been denied.

His was not the only business to be shut out. Only one in 38 applicants succeeded — and some of those successful applicants landed two, three, four and even six separate loans.

What’s more, South Florida, which has accounted for the majority of coronavirus cases in the state, received a puny share of the dollars per capita. Leon County, home to the state capital, received more dollars than Miami-Dade, even though it has one-tenth as many residents.

Neither the Florida Department of Economic Opportunity nor the spokeswoman for Gov. DeSantis, Helen Aguirre Ferré, provided comment on the program and how loans were awarded.

Fewer than 1,000 businesses were awarded loans from the $50 million pot, while more than 37,000 applicants were turned away. Those numbers have led some politicians to demand that the state fund more loans.

Earlier this week, State Sen. Janet Cruz , D-Tampa, sent Gov. DeSantis, a Republican, a letter requesting that he add at least $50 million more to the program and take steps to ensure that no borrower can receive more than one loan.

Lopez-Calleja, who goes by Danny Soul, has been scratching his head trying to figure out how the state picked winners in the program. “I don’t believe it was first-come, first-serve,” he said. “I applied before other businesses. I am living proof that that’s not true.”

He might have had more success had he headed north.

While the state didn’t release the addresses of the businesses approved for the short-term loans, a Miami Herald analysis of business registration data shows that northern counties in the state received a disproportionate share of the state’s loan funds.

No county fared better than Leon — home of the state capital, Tallahassee — where businesses got a total of $4.25 million. That’s more than the $3.75 million businesses were awarded in Miami-Dade.

Neighboring Broward County and Palm Beach County didn’t fare any better, with both counties near the bottom in per capita loans. The only exception in South Florida was Monroe County, home to the Florida Keys, which received the fourth-highest amount of loans per-capita of any county in the state.

Miami-Dade wasn’t shut out entirely. A notable exception was the specialty coffee company Panther Coffee, which scooped up six loans totaling $300,000, accounting for about $1 in every $12 in loans awarded to businesses in the county. Panther has multiple locations. The owners, husband and wife Leticia Ramos Pollock and Joel Pollock, declined to discuss the loans, saying in a message that they “maintain our financial affairs as private.”

Regional offices of the small business development council initially vet loan applications before passing them on to a regional loan committee for final review. In South Florida, applications from Miami-Dade County were processed by the Small Business Development Centers at Florida Atlantic University and Florida International University.

Michael Myhre, the CEO of Florida’s statewide small business development council said that demand for the loans, which are typically made available after natural disasters such as hurricanes, was unprecedented.

“We were inundated here,” Myhre said. “I had truckloads of applications being sent to our headquarters office in Pensacola.”

There were no regional quotas for awarding the loans, nor was there political bias, he said. Rather, loans were awarded based on the order in which regional screeners vetted them. In previous disasters, such as Hurricane Irma, there was never an issue with money running out.

“In any other disaster event, you’ll probably see that it aligns pretty well with the business population,” he said of the distribution of funds across the state. “I think you would have seen it here if there had been more time.”

That’s of little consolation to business owners like Wayne Labush, who spent weeks trying to secure help anywhere he could find it to avoid laying off any of the 47 salaried employees at his Coral Springs event production company, Event Services Group.

He submitted and resubmitted his application for the state’s $50 million emergency bridge loan program multiple times, and spent days trying to get anyone on the phone who could help.

On Friday, he was forced to lay off some employees after his efforts to secure a bridge loan or federal funding through the paycheck protection program came up short. He now sees the Florida program, rolled out with much fanfare by the state, as little more than a promotional stunt.

“I didn’t get anything at the state level except frustration and a lot of wasted time,” Labush said. “Shame on the governor for playing with people’s jobs and small businesses to get himself some good PR.”